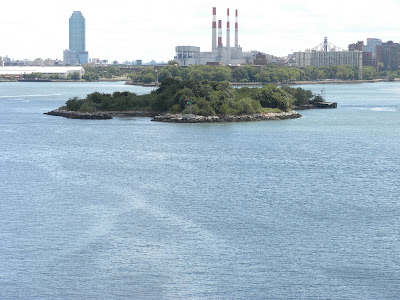 Mill Rock Island
Mill Rock Island lies in the East River due east of 96 St. It is currently uninhabited by people and is a bird sanctuary. I have it on good authority that it is also an unofficial rat sanctuary. The public is not allowed on the island, and the closest I was able to get to it legally was on a rowboat.

The island was purchased from the Indians by William Hallet in 1664. At that time, it was actually two islands, Great Mill Rock and Little Mill Rock. John Marsh built a tidal mill on Great Mill Rock in the early 1700s. This is most likely where the island got it's name. During the War of 1812, the War Department made use of these islands to fortify defenses into the New York Harbor and Long Island Sound. A blockhouse was constructed, and two cannons were installed on Great Mill Rock. This blockhouse was destroyed by fire in 1821, and the island became a squatter's haven. One such squatter, John Clark, sold food and provisions to passing ships.

The Army Corps of Engineers set up shop here at the end of the 19th century. Their purpose was to experiment with explosives to clear out some obstacles in the East River that had plagued boats traveling this passage. In 1885, the largest man made explosion to date was carried out at Flood Rock, a nine acre island close to the Mill Rock Islands. The concussion from this explosion were felt all the way in Princeton, New Jersey. In 1890, debris from the Flood Rock explosion was used to fill in the gap between Great and Little Mill Rock, creating one island. This island was used by the army until 1949.
The island was sold to the New York City Parks Department for $25000. All the buildings were destroyed, as well as a dock on the island. The island was fortified with rocks around it's perimeter to prevent erosion, a new dock was constructed on it's southern tip, and trees and plants were planted.

The island was used for educational purposes, and festivals were held there. The last such event was an Avant Garde Festival held in 1969. Since that time, the island has been allowed to return to it's natural state. It remains in that state to this day. 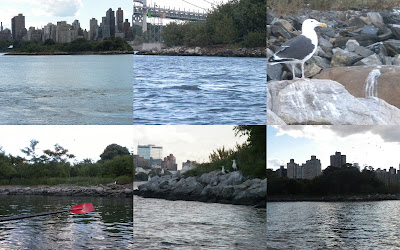 Many thanks to East River C.R.E.W. Inc., Community Recreation & Education on the Water
for providing me access via their free trips on Tuesday evenings.
A later post will have more information about them and their work.
In the meantime, check out their website at
www.eastrivercrew.org

Nick Dee
I have lived in New York for four years and am trying to show people the New York City that they won't see from a tour bus on Broadway.